Royal Far West’s premier fundraiser Ride For Country Kids is counting down the days until the start of this year’s iconic ride.

The challenging ride is Royal Far West’s biggest fundraising event of the year – organised to raise funds to help connect country children to the developmental care they need. The ride begins in Albury, traversing a picturesque route before a triumphant finish over 450km later in Lake Cargelligo.

Building on its 95 years of support from rural and remote communities in NSW, Royal Far West’s 63 committed cyclists will visit schools on the route, meeting children and families who are currently supported by the charity, and also catching up with local alumni, friends and supporters, many of whom will share their stories of their involvement and history with Royal Far West.

Royal Far West invites everyone to come out and say hello at the various stops along the way. See www.royalfarwest.org.au/ride-2019 for where we will be and when!

The reason for the event? Children and families living in rural and remote communities are up to five times more likely than those living in urban areas to have challenges with their developmental health, and greater difficulty receiving the services and support they need, because of where they live.

To improve this inequality, every dollar from Ride for Country Kids 2019’s $500,000 rider fundraising target will go towards Royal Far West’s health, education and disability services to support the children and their families in rural and remote communities who cannot access services locally.

Royal Far West Ambassador and father of a Royal Far West child, Nathan Taylor, will be riding this year to help more country kids access the care they need. Help Nathan and Royal Far West by donating to: http://rideforcountrykids2019.gofundraise.com.au/

All funds raised through the Ride will support country kids.

In addition to raising funds, Royal Far West will also be hosting a series of free NDIS information sessions for families in need of support for children aged 2-12 with Autism, Developmental Delay or Intellectual Disability. The evenings will take place on 6 April in Albury, 7 April in Wagga Wagga, 8 April in West Wyalong and 9 April in Lake Cargelligo. To find out more, parents and carers are invited to contact Fiona Phipps on 0422 411 613 or email windmill@royalfarwest.org.au

The Ride would not be possible without the support of Principal and Founding Partner FDC Construction & Fitout and supporting partners HP and Charles Sturt University (CSU). 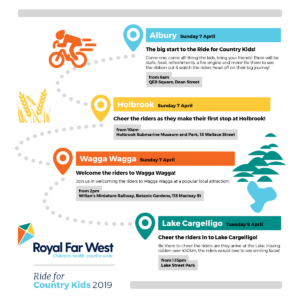 Visitor stops along the Ride route

About the Ride: Now in its sixth year, Royal Far West’s Ride for Country Kids is an annual cycling challenge for anyone with a passion for cycling and a desire to give something back to country kids and communities through participation in a charity fundraiser. All funds raised through the Ride supports country children.