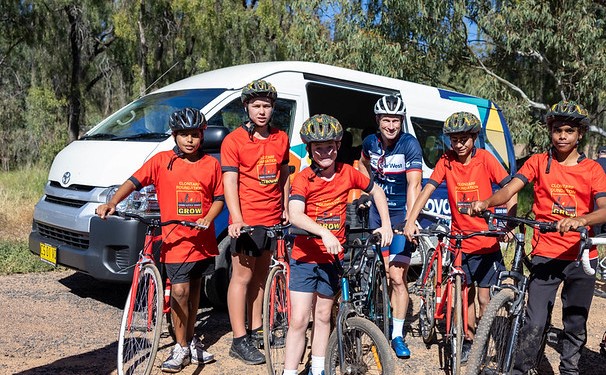 The 2022 Ride for Country Kids is just over a week away! We’re excited that Mark Renshaw (pictured centre with honorary riders from Clontarf on last year’s Ride) is back as Ambassador for the second year in a row, and caught up with him for a chat about all things RFCK recently.

Hi Mark. First off, for those who may not be familiar with you, can you tell us a little about your cycling background?

My history in cycling is very long! I was a professional cyclist for 16 years between 2004 and 2019 and rode for teams including Française des Jeux, Crédit Agricole, HTC-Highroad, Belkin Pro Cycling, Etixx-Quick-Step and Team Dimension Data. I had some amazing highlights throughout my career, including a 1-2 finish on the final stage of the 2009 Tour de France with my teammate Mark Cavendish.

Since then, I’ve traded Europe for Bathurst (where I grew up) and I’m here in the country raising kids with my wonderful wife and running Renshaw’s Pedal Project, a bike shop for all the cycling enthusiasts in Central West NSW.

What was it about the Ride for Country Kids that made you want to get involved initially?

Royal Far West do some amazing work for Australia’s country kids. Being a dad and living in Bathurst, I understand how challenging it can be accessing health services locally when you live in the country. Royal Far West really makes a difference for these kids and their families, and I knew this was a cause I wanted to get behind.

What was it about last year’s Ride that made you want to return as ambassador for 2022?

After how great last year’s ride was, I knew wanted to sign up for this second one. I had a lot of fun out there and met some exceptional people who were proud to be on the Ride and so passionate about raising funds for Royal Far West. A lot of the riders had been doing the event for over five years, so I was very proud to go out and give them a hand and get them across the line.

Plus, I met some people in the local rural communities who were just amazing – so warm, friendly and resilient. It was great to be able to experience the rural areas that the children we’re helping live in. I’m proud to be a part of that.

What are some of your favourite memories from last year’s Ride?

As well as all of the awesome characters I met along the way, I’d have to say the crit race through Narromine! It was great to see everyone embrace those slippery conditions, get on their bikes and give it their all.

Was there anything you encountered last year that perhaps you weren’t expecting?

For sure there were a few things I didn’t expect. During the time of last year’s Ride, they were experiencing a terrible mouse plague throughout Western NSW. It was a new and very eye-opening experience to go out into the country and see the damage it was causing to the area.

Dugald Saunders MP, Member for Dubbo, even described the road out Dubbo as the “velvet highway” as it was just covered with mice who’d been caught in traffic! The reality is, that’s just one of the hardships that people in rural areas face.

And how about any particular standouts?

Again, it was really all about the people. It was quite amazing to hear stories from previous Rides and to learn how much hard work and dedication people have put in over the years, not to mention how much they’d raised to help country kids in that time.

I was also really amazed to see the camaraderie that happened on the road too. For someone like myself, riding 100km in a day isn’t too difficult, but for someone who has just taken up cycling, signed up for the Ride and been training for six or seven weeks, it must be daunting to get out there on the bike and ride those sorts of distances. The guidance given to these people by the most experienced riders really helped them succeed.

On to this year’s Ride…what are you most looking forward to?

The New England region is famous for having awesome cycling routes, so I’m looking forward to getting up there to experience it myself! I’m also really excited to get back out there to meet the local communities again too.

Any tips for new people joining this year?

The setup of your bike is hugely important! Being comfortable on your bike is what will help you get through long rides across multiple days. In saying that, you’ve got to have a well-prepared bike because you don’t want to end up with a mechanical issue out on the Ride – trust me you’ll want to be enjoying all of those scenic views without wondering if your bike is actually going to get you from A to B!

How is your own preparation going?

Preparation for this year’s Ride is going really well! I’m doing a little more riding than I was last year as I feel like I’ve more free time to get out on the bike recently.

How can people get behind you and donate to the Ride?

Raising funds for this year’s Ride is more important than ever. We’ve all seen how the devastating floods have impacted rural communities and Royal Far West anticipates this will only increase the demand for their services.

I urge who can to please sponsor me, or any of the other riders participating in this year’s Ride for Country Kids here. We aim to raise $300,000 to ensure that country kids can access the critical assessments, services and support they need to thrive.

We can’t wait to see Mark and the rest of this year’s cohort on the starting line in Tamworth on 22 May!