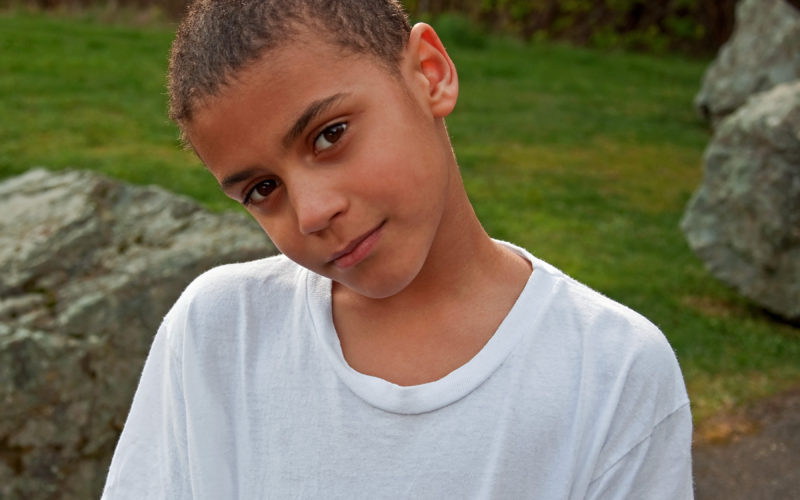 For some children, communication and language skills don’t come easily. Kai is one of those kids.

Kai is eight years old and lives with his mum, Jessica. Kai likes big hugs, is a protective big cousin to “baby Jack”, and he loves making people smile and laugh. Kai has a severe expressive and receptive language disorder.

Jessica says, “He was diagnosed a few years ago, and it was a relief to have some answers. Kai’s such a happy kid, but he wasn’t settling in at school. We lived near Brisbane at the time, so I was able to get Kai in to see a speech pathologist once a week, and it really started to help him. At school, he started making friends with the other kids, and his teacher said she could see he was progressing academically too.”

Last year, Jessica moved Kai to her small hometown about 500kms away from Brisbane, after she separated from his dad. While Jessica and Kai’s family and friends helped them with the difficult transition, Kai’s progress with his communication and language skills ground to a halt.

“I managed to get Kai in to see a psychologist. The situation with his father and moving so far away really impacted him, so it was good to have professional help with that. But, there’s no speech pathologist here in town,” Jessica says. “The closest is a couple of hours’ drive away, and I’d have to take the whole day off work and take Kai out of school for the day to get there and back. I can’t afford to do that. Even if the distance wasn’t an issue, that speech pathologist is fully booked out and we wouldn’t be able to get in for almost a year,”

With no access to speech pathology, and struggling to settle into his new school, Kai became increasingly withdrawn at both school and home, and his behaviour started to deteriorate.

Jessica says, “The psychologist said Kai’s speech issues could be contributing to his withdrawal and the change in his behaviour. She said it’s because as kids get older, their issues begin to impact their self-esteem and their ability to connect and communicate with others. And this is all on top of having to adjust to moving so far after I left his dad.”

It was fortunate then, when a new teacher started at Kai’s school and was allocated to teach Kai’s Year 2 class. “Kai absolutely loves Mrs Harrison,” says Jessica. “I went to the school and met with her. I explained Kai’s situation and told her how we were really struggling since moving because Kai couldn’t see a speech pathologist anymore. She said a few children at her last school with developmental issues had been able to access speech pathology, psychology and occupational therapy remotely via Telecare with Royal Far West.”

“I knew of Royal Far West from when I was a kid growing up out here in the bush, but I didn’t realise they were working with kids in schools via video calls now. Anyway, Mrs Harrison talked to the school’s principal and they contacted Royal Far West, and were able to organise a Telecare assessment session with a Royal Far West speech pathologist for the beginning of Term 2,” Jessica recalls.

Telecare for Kids is an innovative health service, delivered via video link technology to country children who are otherwise unable to access the developmental healthcare they need.

Kai’s initial assessment was carried out by Caroline, one of our experienced speech pathologists. The aim is to identify Kai’s communication strengths and weaknesses. The assessment allows our clinicians to understand the child’s needs, and allows them to develop a therapy plan to support the child and their therapy objectives. Caroline’s work with Kai aimed to improve his ability to communicate with his family, friends and at school, as well as strategies to support his academic performance, behaviour and wellbeing.

“Something I’ve worked on with Kai is his ability to give a recount, or retell a story. Most children do this each week, when they each take a turn to present their “news” to their classmates. Because of his language disorder, Kai was having great difficulty, putting words into sentences, sequencing his ideas and giving all the key information. Not being able to articulate his thoughts was incredibly frustrating for Kai, and that frustration was being compounded when his classmates couldn’t understand what he was trying to convey to them,” says Caroline.

“One activity Kai and I would do during a Telecare session is a ‘recounts worksheet’. The worksheet helps break the task down into smaller steps, and it gives Kai a visual prompt for who, where, when etc. This activity supports his ability to access language and build communication skills. His mum, Jessica, and his teacher, Mrs Harrison, are also able to use the worksheet at home and school to help Kai practice sharing his news and recounting a story,” she explains.

Accessing health services and support via Telecare gives children like Kai the opportunity to build essential life skills, and helps them to reset their trajectory in life, so they won’t have to struggle in adult life.

For the last six months, Kai has had a weekly speech pathology session with Caroline, and he has responded very positively. He enjoys the sessions and has a great relationship with his speech pathologist. Caroline says, “Kai is now demonstrating his true potential. He is making steady academic progress and building positive friendships at school – all of which will support him to live a happy and successful life.”

Jessica is also thrilled with Kai’s progress, “The last 12 months have been really difficult for Kai, and not having any speech therapy sessions really impacted him – but there just weren’t any options out here. Thank goodness his new teacher knew about Telecare. I’m so grateful we’ve been able to get him back into weekly sessions. They’re making such a big difference already. I like that I can help him at home too. It feels like a well-coordinated approach between me, Mrs Harrison and Caroline. We’re all working together to help Kai.”

You can help kids like Kai reach their full potential by making a generous donation today. Thank you.