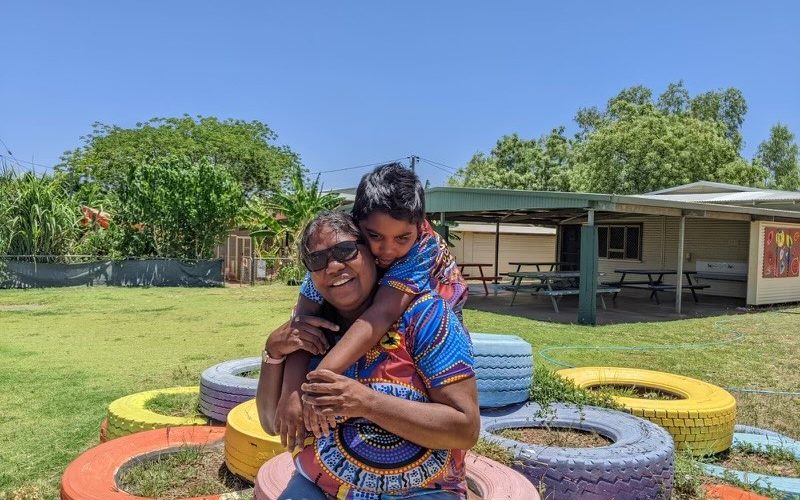 Junior suffers from epilepsy. He and his mother Delaine travel 40km every day by bus to the Yiyili Aboriginal Community School where Delaine works.

Junior loves to play and is gentle with little kids, but when he was diagnosed with epilepsy aged three, things became difficult. Junior’s left leg went stiff and he couldn’t walk. After several failed attempts at diagnosis a new doctor recognised straight away that Junior was having a seizure. After more than a month in Perth, involving tests and scans, Junior’s father brought him home on medication.

Delaine was alarmed at his changed behaviour under medication. He was throwing things in the classroom, being aggressive and punching kids. What his parents didn’t know was he had a rare epilepsy with two types of seizures: one where he would scream and act out; and one when he would fall silent, his body tightened.

Delaine asked his teacher for help and the school’s principal contacted Royal Far West. An occupational therapist started regular sessions with Junior and Delaine via Zoom. She gave Delaine advice on how to be with Junior in the classroom and at home.

Delaine says, “It opened my eyes. How can we relate to this kid and make a big difference in his learning? She helped me so much…she did a magical thing, oh my God, it worked.”

When Junior became aggressive his parents would, as advised, roll him in a blanket and rub him down. To their surprise Junior would immediately drop into a deep sleep.

“He nailed it. He cooked Chinese dumplings and fritters all by himself. I’m like, do you have any proof? She was recording you the whole time!”, Delaine says.

More tests resulted in changing the medication, and that’s when Junior started sleeping well at night.

“I’ve seen so much change with him. The RFW mob have supported us and showed us the way. I can’t repay them. Now Junior can read and he can write his name independently”, Delaine says.

RFW also conducted telecare sessions with the teachers. A special needs teacher carried on the work by learning techniques to use in the classroom. A visit to the school by one of the occupational therapists helped develop the therapy further to include swimming and camping.

Now on school days Junior gets up very early, when previously he was tired in the mornings.

Delaine reports, “Usually he said, ‘Mum, go away. I’m tired.’ Now every time there’s swimming lessons or something fun happening at school he is excited.”

Our client family requested and have approved the use of their names and image.