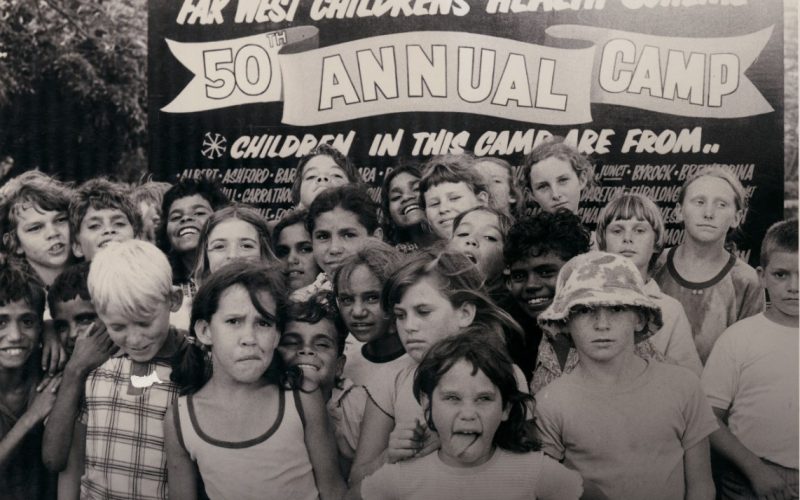 These camps were legendary – they were specifically for kids from the far west of NSW ‘who need a holiday and who have never seen the sea’.  Apart from the exhilaration of seeing the ocean for the first time, the camps offered routine medical and dental examinations, with minor problems treated.

The camps were instigated by our founder, the Rev. Stanley Drummond, who came to Manly from the hot Cobar summer in 1924 to recover from an illness, and had a vision that many of the children who were living in harsh conditions in outback NSW would similarly benefit from a seaside holiday. Quick to act, he and his wife Lucy raised funds to bring the first 58 rural children to a free seaside holiday. This tradition continued 1977, by which time improved transport and government assistance for isolated children meant that the annual camps were no longer needed.

What happened at the 48th Camp?

Summery days and magical waves were assured for the 153 children aged 10-12 who excitedly arrived from remote areas of NSW’s Far West.

They came from Mungindi in the far north, Fort Grey in the corner country of the north west, Menindee in the far west, Curlwaa in the far south west, Moulamein in the far south and towns in between, including Boggabilla, Brewarrina, Bourke, Cobar, Euabalong, Goodooga, Hay, Hillston, Ivanhoe, Moree, Nullamanna, Pilliga, Tibooburra, Walgett and Wilcannia.

Camp headquarters was once again at the Manly Public School, thanks to the NSW Education Department, with classrooms converted into large dormitories furnished with brand-new, freshly smelling straw-filled mattresses that had been made by the enthusiastic ladies of the Blayney Far West Sewing Circle and Branch. Besides dormitories, kitchens, a first aid post and offices were created to ensure the smooth running of this very large camp.

A fabulous catering department was essential to keep the ravenous girls and boys content! Thanks to our good friends of the School of Artillery at North Head and the 7th Royal Australian Regiment at Holsworthy, by courtesy of the Department of the Army, an enormous marquee and two army-style tents were erected for the dining room.

On arrival at Manly, a number of the children were underweight, but the excellent and plentiful meals, daily rests, building up programs and good sleeping weather (in comparison to the scorching heat back where the kids lived), helped the children to gain some healthy condition to their bodies.

Long, lazy mornings at the beach combined with outings in the afternoons, including pantomimes, ballet, the zoo and Luna Park (travelling there for free thanks to Qantas and TAA) and fun nights in the campgrounds all added up to a memorable Camp. As a special treat, the kids were guests of the Royal Motor Yacht Club on the HMAS Hobart on Sydney Harbour.

All too soon the kids had to say goodbye, but their precious memories of their days at the 48th Annual Far West Camp would stay with them forever.

Stay up to date with our latest news and take look at more images from our archives by following us on Instagram.

Tags:archives, Royal Far West, Significant Moments, Stories from our past