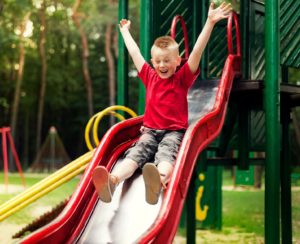 Working with Royal Far West has had a wonderfully positive impact on nine-year-old Andrew*, who lives with his father Peter and brothers in country NSW.

Referred to Royal Far West by his paediatrician for a multidisciplinary assessment due to possible Autism Spectrum disorder (ASD), Andrew had a significant language delay, learning difficulties and fine and gross motor skill difficulties. He also had a high level of anxiety and was struggling to make friends and participate in class. His school reported his language delay was impacting on his learning, on his interactions with staff and students, and on his self-esteem.

Following his assessment at Royal Far West, an ASD diagnosis was ruled out, however Attention Deficit Hyperactivity Disorder (ADHD) was confirmed. Medication was prescribed to support Andrew’s concentration, and his father was supported by our expert social work team to access local services to support his son’s language development and anxiety, and to enrol Andrew in sport or a recreation activity to increase his social engagement. Peter was also inspired to attend our parenting course ‘Tuning into Kids’.

On the family’s return visit to Manly, Andrew’s father reported that the medication had helped with Andrew’s concentration, however they were unable to access local services due to ineligibility and cost. At this point Andrew was provided with a 12-month Royal Far West Telecare scholarship courtesy of the generosity of the Stephen Dixon Keir Memorial Fund to support his speech, communication and anxiety.

Occupational Therapy (OT) with Emily
“Andrew was a shy and timid young boy when he arrived for his assessment in May 2017. He had a tendency to shut down, especially if tasks were too challenging, or in overwhelming environments such as his classroom. This was observed within Andrew’s classroom, during a Telecare observation, and reported by his class teacher.

“In addition to his emotional regulation other foundation skills were identified as being difficult, including core strength and fine motor skills.

“In his weekly Telecare OT sessions, body-based strategies including deep pressure, heavy work and breathing activities were completed to support regulation and additional foundation skills. Such activities were also completed at home and recommended for the classroom.”

His ‘Speechie’ Emma comments, “I believe his Dad’s hard work and Andrew’s perseverance with the homework I gave him really helped improve his language skills. It was fantastic to see his progress each week, observing his confidence to engage in conversation, and witnessing his resilience and ability to complete tricky tasks.”

From Andrew’s Dad:
“Last year Andrew was in Year 4 but he was working at a Year 2 level … that’s how bad it was, that’s why we had to put things in place.

“Three quarters of the way through last year everything changed, all due to Royal Far West, especially Andrew’s OT. There was a massive, massive difference.

“Before he was flying under the radar with his head in his hands on the desk, and now he’s up and talking and part of it all. Andrew has started soccer … and there’s NO WAY in the world he would have been involved in outdoor sport. It’s amazing how things have changed.”

*This story has been de-identified to protect the privacy of the family.