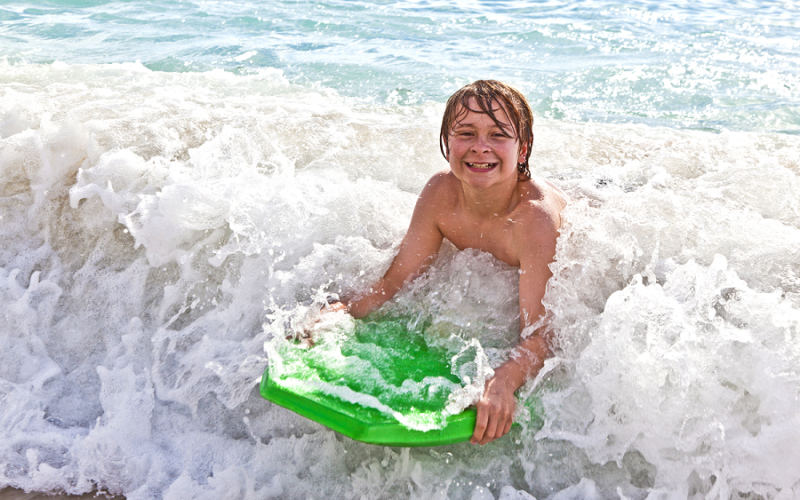 When Andrew* was referred to us, he was two years behind at school. He was in Year 4 at school in a small country town, and had spent most of the year not participating, not engaging with his teacher or classmates, with his head on the desk, and quickly getting further and further behind.

Increasingly worried, his dad Peter began a process of elimination to try and identify what help Andrew needed. He started with hearing and vision checks, but with limited local services, it was a struggle to get appointments. It took 18 months alone to get Andrew’s hearing tested, and when Peter was unable to get answers, he took Andrew to see a paediatrician at the regional hospital an hour away. The doctor thought Andrew may have Autism Spectrum Disorder, but recognised there were a number of aspects of Andrew’s health that needed to be fully assessed by specialists, so he referred Andrew to us.

When they arrived here in Manly, their first port of call was attending a number of appointments and assessments with our team of paediatric healthcare specialists including doctors, nurses, psychologists, speech pathologists and occupational therapists. Through these assessments, Autism Spectrum Disorder was ruled out, but Attention Deficit Hyperactivity Disorder (ADHD) was confirmed. A plan was put together to help manage Andrew’s ADHD, which included strategies for home and school, as well as medication to improve his ability to concentrate.

At their follow up appointments, Peter reported the medication was helping Andrew’s concentration, however they had been unable to access local therapy services due to ineligibility and cost. In some cases, local service providers were simply unable to help as they did not specialise in child health and developmental disorders.

This is why we provide the services we do – to bridge the gap between country kids and the specialist care they need.

We offered Andrew a place in our Telecare program to support his speech, communication and anxiety, and Andrew attended weekly psychology, speech pathology and occupational therapy sessions at school via video link. At first Andrew “would just sit there and not really respond to Emily, his occupational therapist or Emma, his speech pathologist. But after a little while, he started to participate, and that’s when everything started to change,” recalls Peter.

A year later, Andrew is a completely different boy.

“Andrew’s turnaround is remarkable really. Especially in the classroom. Before, he was doing nothing in class – he literally had his head on the desk for a whole year. He was in Year 4 doing below Year 2 work last year, but now he’s now doing Year 4 work, in Year 5. The progress is just amazing. I’m so proud of him!” says Peter happily.

Peter acted upon our recommendation to get Andrew involved in a team sport, and Andrew joined a local soccer club. “It took a few weeks for Andrew to gain confidence to participate and interact, and then ‘bang!’ he was into it, and he’s actually really good at it! I could never have gotten him to play sport a year ago, and now he’s played a whole season. There’s no way he would have done that without all the help he’s had. It’s changed everything!” says Peter.

Right now it is estimated up to 300,000 kids across rural and remote Australia are without access to the specialist healthcare they need.

Because our Telecare program can be delivered to a child in even the remotest of locations, we have the potential to revolutionise healthcare for Australian country kids.

You can help other country kids like Andrew access the specialist healthcare they need to thrive, by making a tax deductible donation online.

The progress that Andrew has made in one short year is simply incredible, and really shows just how important early intervention is, because without treatment, vulnerable children may grow up to become vulnerable adults. It is a travesty that country kids, with largely manageable disorders, may not reach their full potential in life.

Peter has noticed a big difference in Andrew’s willingness to try things he used to be anxious about, “A few years ago, he wouldn’t even put his big toe in a pool. Now when we come to Manly, instead of running away from the water, he runs straight in!”